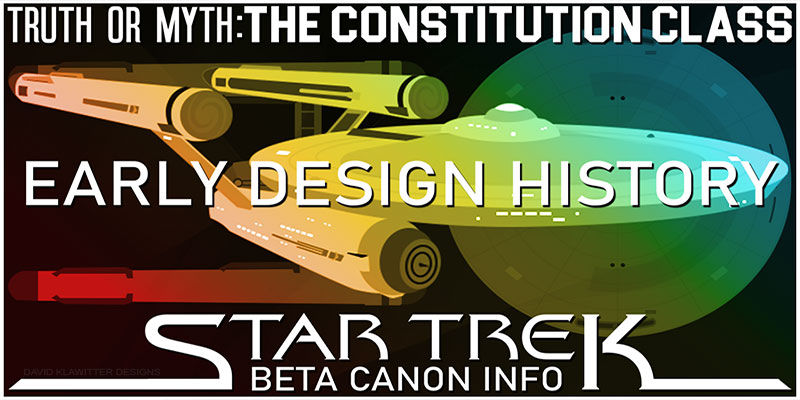 Hello and welcome to another episode of Truth OR Myth,  a Star Trek web series that normally looks at the Truth, or canon, information to dispel the myths that have surfaced on a given topic.  Today’s episode continues our journey through Beta Canon, this time taking a look at the Constitution Class of Starfleet Starships.

With the vastness of Deep Space before them, and Starfleet’s current design level getting old and slightly lacking, Starfleet Command would approve a bold plan by one of it’s Shining Star Captains, that would see the United Federation of Planets head in to an amazing new Era of exploration heralded by a new Starship class, the Constitution Class.

Of course there IS a lot of information available of this class in Alpha Canon, But there is really a lot about it’s early design history!  So what I’ve done is thoroughly researched the Class through Beta Canon, combined it with Alpha Canon and filled in some of the gaps with my imagination, all to give you good “Tri-naries” a little bit more design history info to chew on about this class that started it all.

As a result though, this video should pretty much be taken with a grain of stardust, and only considered a little bit of Star Trek Fun!  And so, with all that out of the way, lets begin.

The United Federation of Planets was growing at an exponential rate, far faster then anyone could have predicted. As a result of this ever-expanding border, Starfleet Command was quickly realizing that it’s the current roster of starship designs, simply weren’t up to the task of defending Federation Space. One of Starfleet brightest stars at the time, Captain Robert April, was deeply concerned about Starfleet’s mounting losses as the organization continued to explore outwards, and in order to tackle this problem head-on, Captain April requested a transfer to the Starfleet Starship logistics and Design Bureau and his request was approved.

Back during his early days in Starfleet, Captain April had dreamed of far more immense and technologically advanced starships then Starfleet or the Federation had ever seen.  So much so was his obsession with starships of the future, that he had begun to design classes as early as 2215.

Gathering up all his starship designs, Captain Robert April set up a meeting with Admiral William Jefferies shortly after settling in in his new position at the Design Bureau. Laying out his case, Captain April requested permission to set up his own division in the bureau to explore possible Starship Designs to revolutionize Starfleet. Weary of this idea, Admiral Jefferies at first declined Aprils request, stating that even beginning such a division would take decades to complete and that it would be a better idea for Captain April to simply work with the current Bureau to improve already existing Starship Designs such as the Walker Class.

Not willing to be deterred, Captain April then presented Admiral Jefferies with his entire library of Starship Designs he had been creating for almost 15 years, including an impressive unnamed dual hull design like nothing Starfleet had seen before, and asked the Admiral to look over his design ideas and reconsider his position. Less then a week later, Admiral William Jefferies signed the executive order to create the Starfleet Core of Engineers, a new division that would oversee the creation of a brand new breed of Starfleet Starship Designs. Setting up shop, Robert April immediately began to assemble his design team.  Pulling the best and brightest from all over the Federation, April presented them all with his designs and set them to the task of fleshing them all out into reality.

Overall these projects would be successful, and Starfleet Command would begin construction on many of the classes created by this new division.  And these classes would be far superior to those that had been created by the original bureau, which Starfleet now viewed as living the past and stuck in their old ways. As a result, Starfleet would make the unprecedented decision of disbanding the Bureau and replacing it with the new Core of Engineers Division as it’s the primary source for Starship Designs.

Admiral Jefferies was very proud of Captain April and what he was doing for Starfleet and the Federation but was also a little confused.  When he originally granted April permission to start this new division he had been swayed and impressed by one design, and one design alone, yet by 2240 Admiral Jefferies had yet to see any progress at all made on this design.

And so he approached Captain April about it.

Explaining, April told the Admiral he had not forgotten or dismissed that design but simply felt Starfleet’s current technological level could not validate the resources required to make this design a viable one for the fleet.  And until Starfleet had some major breakthrough in its technology, he had simply put the design on the back burner, though he did have the generalized hull and internal layout for that design completed.

Looking over these designs, Jefferies was truly impressed and immediately ordered the design into production.  April feeling this would be a mistake, bucked against the Admiral’s Order and argued once again for Admiral Jefferies to reconsider, but this time the Admiral stayed firm.

He explained to April about the unprecedented decision Starfleet had made to replace the bureau with Aprils Starship Design Division and that all of Starfleet’s eyes were on this new division to justify the faith Starfleet had put in to them.

But the argument that swayed Captain April to Admiral side on the project was when Jefferies explained to the Captain that Starfleet Command was looking at new plans to further the exploration of the Alpha and Beta Quadrant, pushing Federation Boundaries even further with a series of 5-year missions which would all be given to one class of Starfleet Starships.  And this class should be a brand new, state of the art class the likes of which no one had ever seen before.  A true jewel in Starfleet’s Crown.

Discussing options on how to proceed with the new project, the 2 men decided on a dual approach to this class, having 2 starships constructed rather than the usual 1 for testing. The first would be directly under the development of the Admiral himself, while the second would be under Captain Aprils Construction Command, and the 2 men parted ways and Construction began on both starships. These 2 starships would both have the same design based on Aprils blueprints but both would end up very different, taking different paths to achieve their goal.

The NX-1700 construction would be completed first, and since it was first, it’s name, the U.S.S. Constitution, would end up as the entire classes name. The U.S.S. Constitution utilized the latest in Starfleet Technologies, including a vastly superior Warp Core then had never been seen before.  Enhanced Sensor and Deflector systems were also included in this starship, and she was secretly launched in order to begin her shakedown testing. While testing was underway, Admiral Jefferies would pull her from her shakedown in order to take a decisive part in the Battle of Donatu V. Where the USS Constitution was able to rescue USS Yorkshire,  but was badly damaged and required extensive repairs.

Meanwhile, Captain April’s second Constitution Class starship continued it’s construction but at a slower pace. April still felt that Starfleet’s currently technological level was too low to sustain the class, and so he delayed construction on his ship as long as possible in order to come up with a solution that satisfied him. Reviewing all Starfleet record on current technological breakthroughs, April was intrigued when he ran across an article about a young genius who had seemingly developed a new type of computer control circuit.

Setting up a meeting with this 24-year-old Genius named Dr Richard Daystrom, Captain April was immediately captivated by the possibilities that the man’s new circuit, which Daystrom had named a Duotronic Circuit, presented for his Starship Design. This new circuit afforded much better control over computer systems, and much faster computer processing power than had ever been thought possible by April and his design team. After listening intently to Daystrom presentation, Captain April turned to the man and asked one simple question, “How long would it take you to make and integrate your new circuit into a starship design.”

Considering this for a moment, Daystrom almost immediately replied, “Less than a year.”   And with that, the 2 men shook hands and got to work, and in less than a year, the new NX-1701 was launched, ready for her shakedown.

During its shakedown the U.S.S. Enterprise far outperformed the U.S.S. Constitution by leaps and bounds.  Not only was Starfleet impressed by Aprils new Starship Design, but they ordered the USS Constitution to be upgraded with Duotronic Systems, and that all other starships currently under construction be given this new technology as well. By 2245, both starships had dropped their NX prefix and had been given full NCC ratings, and Starfleet would order 11 more of the class to begin construction, but the real test for the class was yet to begin.

In fact, so important was this new class and its mission that Jefferies made a special request of Captain April to leave his post at Starfleet’s Core of Engineers and Command the USS Enterprise into deep space. The Constitution Class had been April’s dream for as long as he could remember, and with a little bit of convincing on Admiral Jefferies part, April agreed to Command the Enterprise, and April would assemble the Enterprise’s first crew.

And by late 2245, the U.S.S. Enterprise and the U.S.S. Constitution would head off in to the final frontier.  Seeking out new life and new civilization, boldly going where no one had gone before…

Thank you for watching today’s episode of Truth or Myth, what do you think of the Beta Canon design history for the Constitution Class?  Do you think more information on its history should be included in the Strange New Worlds Series?  Well leave your comments in the section below and don’t forget to like the video and subscribe to the channel, hitting that little bell icon so you won’t miss a single video we release.

What to help the channel with it’s Duotronic Breakthrough? Then just click HERE to become a channel Patron…

Truth Or Myth – Star Trek V – Was It Really That Bad?

What Did I Miss? – Discovery Season 3 “The Sanctuary” Trailer & Sneak Peek Breakdown

Join Eric ahead of this weeks episode as he breaks down the trailer for Star Trek: Discovery Episode 8 – “The Sanctuary”

What Did I Miss? – “Unification III” – Easter Eggs, Breakdown & Review

What Did I Miss? – “Scavengers” – Easter Eggs, Breakdown & Review