The debate still rages on as to what universe Discovery is set in.

Ever since the announcement of Star Trek: Discovery, there has been heated debate to what timeline will it belong to, Prime Timeline or Kelvin Timeline (The Reboot Films), it was not until July 2016 at San Diego Comic Con did we find out for sure, before he left the production, Bryan Fuller said at the press conference when asked:

“It is in the prime timeline.” 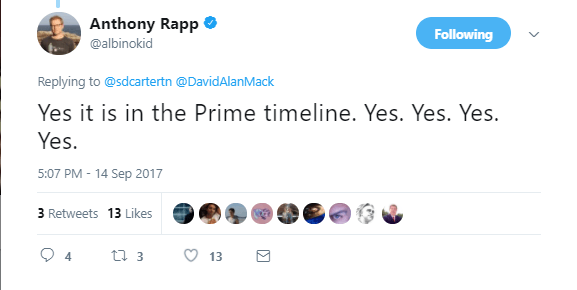 However, even after a year, people are still asking the same old question or just not believing what they have been told.

So again the fans were told it is set within the Prime Timeline, but this time it was one of the actors directly involved with Discovery, Anthony Rapp took to Twitter to confirm it is indeed set within the same universe as the rest of the Prime series, to back him up, Star Trek novelist David Mack, (who has helped co-write two DS9 episodes, countless Star Trek books including, the Destiny series and recently wrote the DSC tie-in novel, Desperate Hours) replied to his tweet with the response”

“What Anthony said. Yes, Discovery is in the Prime timeline. It fits w/canon. Apparent “discrepancies” will be addressed/resolved. It works.””

Subsequent to all these announcements, some official and some from people involved with Discovery, you would now think ok, worry over, we can now sit back and watch and see how things pan out over the course of the season, unfortunately not.

No matter where you turn on social media, be it Facebook, Twitter, Reddit or alike you will always see the same heated debate. It has been said now more times than you could count that Discovery is set within the same timeline as TOS, TAS, TNG, DS9, VOY and ENT, so why will so many not believe it?

Instead of just dismissing things as angry fans, there are some important factors at play here as to why there is still resistance and to why maybe some fans just can not let go of the old and embrace the new, after all, is this not one of Star Treks most important lessons, acceptance?

The look and style of the show do not match what we have seen before within the Trek universe, however, it is 2017, what we saw over a decade ago maybe fine for the hardcore Star Trek fan, would not be ok for the new generation of fans, who have a plethora of Sci-Fi out there to watch.

The aim of Discovery is not to keep the old fandom happy but to bring new fans into the mix, while honouring what has come before.

Star Trek has such a rich and exciting history and has so much to offer a new generation, the merging of old and new, it is exciting, although some see this as a bad thing, why would this be bad? everything must evolve to survive, Trek is no different and like it or not, this is one reason Star Trek left the air when it did, it became stale.

The way the story is told

This is something totally different, gone are the days of 26 episodes, and only a handful of them related to the story arc, Discovery is 15 episodes long, each episode is like a chapter in a book, so unlike previous series where you get a beginning, middle and end all within the 45 minutes, it will take you at least until the back end of the season to truly understand what is going on.

It is too dark to be Trek

While this has some merit, the tone of Discovery certainly is one that we are not accustomed to within the Trek universe, but it is not a Trek first.

Over the last 51 years, Star Trek has touched upon some very dark topics, ranging from total world annihilation in “Let That Be Your Last Battlefield“, all the way through to the entire Dominion war in Deep Space Nine namely episodes like ” Nor the Battle to the Strong “.

Nevertheless war and destruction has not always been the darker tone taken by Star Trek, in the Voyager episode “Remember” there was Genocide, on The Next Generation there was the episode “The High Ground” which centred on terrorism, Enterprise showed us bigotry and xenophobia in the two-part episode “Demons”/”Terra Prime” furthermore let us not forget the Rape scene in Star Trek Nemesis, even though these are but a mere fraction of the times we have been shown a number of very dark things, no matter the series or film Star Trek has always shown us that the future is not always sunshine and rainbows .

It has lost its Trek

This could not be further from the truth, within the first 6 episodes alone we have seen the following,

Redemption – Burnham is on a personal mission of redemption to show she is not just “That Mutineer”.

Forgiveness – Saru Forgave Burnham for her role within the “Battle For The Binary Stars” and the death of Captain Georgiou.

Animal Welfare – Stamets and Burnham put the welfare of the Tardigrade over the rest of the crew when they realised they were hurting a sentient life form.

Acceptance – First onscreen Gay Couple – shows love has no boundaries in the future.

Guilt/Atonement – Burnham feels guilt over her role in the death of Captain Georgiou and is trying to atone for her mistakes.

In the recent episode we found out what happened to the former crew of Captain Lorca on board the U.S.S. Buran, you could clearly see his guilt in those events, his ocular injury was a direct result of that and instead of getting them treated he lives with them as a constant reminder of what happened.

During a scene in the last episode, Lorca said

“We Choose our own pain, Mine helps me remember”

Personal Sacrifice – Stamets was willing to sacrifice himself for his crew and to stop the further harm of the Tardigrade.

Bereavement – Saru & Burnham even after 7 months are feeling the loss of their last Captain and you can see this not only in the way they both act towards others but how they act towards one another.

Some other examples are:

PTSS (PTSD) & The Klingons are finally being showing for the complicated species that they are, which yes we knew but we are now seeing this first hand…

It is trying to erase 51 years of history

Although the new visuals seem to lend credence to this theory, it has been addressed again and again most recently in at a press conference with the cast at New York Comic Con panel, Akiva Goldsman clarified:

“We are not the Kelvin timeline…which is a reboot of the original timeline…We are not part of that timeline, we are the original timeline with the TV shows and the movies that fit into that. We are ten years before The Original Series…Where Constitution Class ships are in comparison to where this Discovery prototype – well one of two prototypes, well now one of one prototypes – are technologically is obviously a variant. We are wildly aware of everything that appears to be a deviation from canon. We will close out each of those issues before we arrive at the 10 year period and hit TOS.”

The show is only six episodes old, we have nine episodes left of season one, and potentially another six seasons for the makers of Discovery to address all these concerns, and if they want to bring Discovery in line with the rest of the previous incarnations of Star Trek they will. However if after another six seasons and nine more episodes they do not then! And only then Is the time to cry foul, not when the series is only six episodes old.

So back to the original question, is it Prime or Kelvin?

DSC, not only has the correct abbreviation been shown in the show, but because of all the STD nonsense people have thrown about, John Van Citters, the VP of Product Development and one of the biggest Trek nerds of all time took to twitter July last year to confirm the correct acronym/abbreviation. 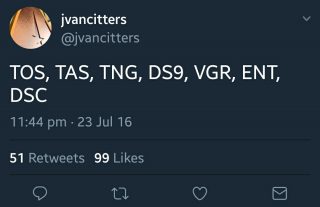 So there, folks, it is not,

STD or DIS it is DSC

Besides, an STD is something no one wants right???.

Discovery Could Last a Long Time and Syncing Up With Canon